I first came across Ethel Leginska while working on a soundwalk set in the city of Hull. The walk in itself never materialised for a variety of reasons but Ethel Leginska has stuck in my mind and keeps fascinating me, haunting me.

Ethel Leginska was born Ethel Liggins on April 13, 1886, in Hull, a thriving port city in northeast  England. Her family was to poor to be able to afford educating her in music, but a wealthy family in Hull discovered her talent for music and became her patrons. Ethel went on to study music in Europe, and during one f her first recitals at age 16, it was suggested that she change her name from Liggins to Leginska to further her career since Slavic piano players where very popular at the time. 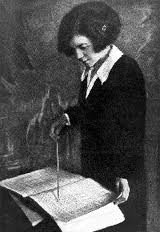 Searching for photographs of her, I find myself looking at a woman looking back at me, facing the camera, meeting  and returning its gaze, and also mine. She seems to project a contained intensity, passion held in check.Maybe I just see what I want to see, or expect to see. There are several accounts of Ethels charisma and intensity while performing. She wore her hair in a short bob and refused to wear the customary evening dress while performing, instead preferring a velvet jacket and a skirt. She is also quoted as urging women to “break the barriers” for women pursuing a career in the creative professions.

In 1907 she married the American Roy Emerson Whittern. Together they had a son, Cedric. Shortly after this – in1909 - Ethel had her first breakdown. There is not much information about what happened. Ethel went missing for several days. Her husband found her in rooms in London. What happened during those days? Why the need to go away?

Bare feet on the floor I can feel the ancient building all around me, inside me. I am running through the darkness. There are others, we are moving together through the long tunnels. We are connected yet separate and we are hunting. Like wolves we sense our prey ahead. Somewhere above is the full moon.

Ethels career started really taking off around 1915. This was also the time when off stage troubles started to appear in her life more and more. She separated from Whittern and entered into a custody battle for their son, Cedric. Ethel often spoke about her passion and love of the piano and her music. Yet she offered to give up her career, to support herself by teaching in order to get custody of her son. The judge still sided with Whittern and Ethel had next to no contact with her son after this. She often spoke out about how hard it is for women to work in what was the then ‘music business’ – yet she kept pushing herself forward, seeking new challenges. She composed, one of the first women to do so. She used her concert appearances as leverage to be able to conduct orchestras.

I imagine her as fearless, a true pioneer – but perhaps that is only for my own sake, to remain focused on my own artistic work.Several times she failed to appear to concerts where she was booked in. Is this the urge to disappear, to leave behind, to start new? - but yet she always returns. To the old, to the secure. Or to a passion worth sacrificing everything for, a love that asked for everything, that she gave all she had?

Or maybe in those moments, short times of escape, she lived a different life for a little. Maybe she met someone. Maybe she laughed a lot, went to restaurants, dancing. Wearing a wig and an old dress. Trying a life not her own. I like to imagine that.